You are here:
Transcreation FAQ 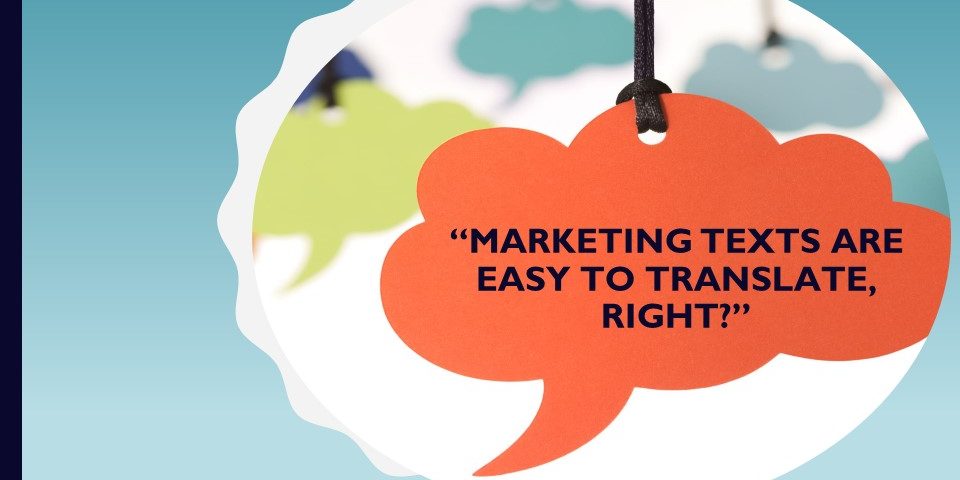 After all, these are texts that are generally “easy to understand”, given that they are usually geared to a general public. So, how hard can it be to just take those words and translate them into another language?

The truth is: It is tricky. There is a lot that can go wrong.

Read about a recent experience I had when I placed a marketing-type of copy with someone who called themselves a “translator experienced with marketing texts”.

A communication agency client of mine asked me if I could help them with transcreating a 30-second promotional video from English into a language I understand but don’t personally work into. It was rush – 24 hours was all we had. Given my long-term relationship with this particular agency, I agreed to coordinate the job for them.

My regular contacts weren’t available, so I reached out to my network for referrals. I got a recommendation for a colleague who, on his website, presented himself as a native speaker of the target language, based in the target-market region, and experienced with marketing material. A transcreator even. He appeared to be an excellent fit.

I got in touch and explained what I needed from him.

– “Sure, no problem,” he said after having seen the text. “This looks very straightforward.”

I was getting a bit uneasy. Nothing in advertising is really ever straightforward.

– “I can do this by tomorrow”, he continued. – “I do have a minimum rate in the amount of half an hour’s work, however, would that be okay?”

Now I was really alarmed. How would he be able to research the brand, work on the tone of voice, get the play on words right (there were a couple), all in the matter of apparently 30 minutes?

And why didn’t he ask for background information? Reference material? A brief?

But I was out of options, so I agreed, even offered to pay more, indicating the need for research etc.

No, he was all set and didn’t need anything more, he said. I was worried, so I got back in touch with my agency client, asked them to get the end-client’s video that the subtitles were for, put together a brief, researched the company’s target-market website for references on tone of voice and preferred word choices, sent that package to the colleague, and prayed for the best.

The next morning I got the text, ahead of time.

Which was a good thing.

Because I had lots of questions.

While it is hard (very hard!) to accurately judge subtle nuances in a language you understand but don’t actually use yourself on a daily basis, it was clear to me from the text he delivered that he hadn’t paid attention to the brief I had supplied. Key allusions to the company’s mission that I had specifically pointed out were missing. And some of the sentences were just too long for subtitles.

While I do appreciate this colleague’s spontaneous willingness to help out at short notice (!), it’s interesting that he “didn’t have time” to peruse the reference material I had put together for him and even though I had offered to pay for time spent on research.

Is it that some colleagues just don’t like to do the research? They’d rather send a half-baked version at minimum charge than deliver a complete package at full price?

Or was it naiveness? That happens often, too. Colleagues positioning themselves as transcreators without really understanding what that entails. Now, I don’t want to judge. But I’m surprised. And a bit sad.

To cut a longish story short: We went back and forth several times until we had what I felt was what the client needed. (He was very forthcoming and responsive, so I guess it was really naiveness on his part). We offered two versions and I wrote rationales for the choices we made so the client could understand the pros and cons.

The end client was happy. The video was aired with our recommended text version.

That is because of all the extra work involved, especially if it’s for a company you have never worked with before. Sure, we could simply have translated the text, but I very much doubt the client would have been happy.

As a client you don’t pay the transcreator for taking words and substituting them in another language.

You pay for them to go all the extra miles to ensure they get every nuance just the way YOU want them.

Transcreators research, ponder, polish, discuss, check out your entire website, research your main competitors, put together a brief, write up rationales, explain how certain nuances need to be changed because of target market customs.

In a nutshell, they give you reassurance that they know what they are doing and what you are looking for.

Have you ever wondered why advertising and other communication agencies charge what you might consider “high” rates for very little text? The same goes for transcreations. You pay for the brain-work (and virtual leg-work), not for the typing.

If you like my approach and work ethic and think I could help you with transcreation projects, get in touch.

Why should sales and promotional material be handled by transcreators instead of regular translators?
2020-05-02

I am bilingual and have taken courses in creative writing. Does that qualify me as a transcreator?
2020-04-13

Why use the term transcreation rather than marketing translation?
2020-04-12